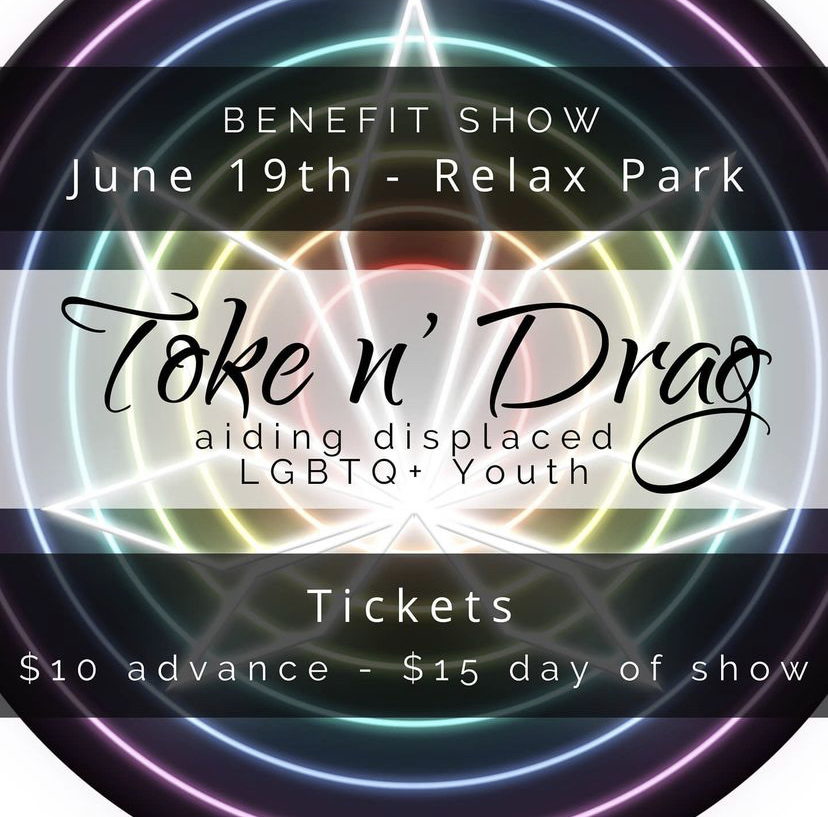 What are you doing for Pride Month 2021?  If your month is filled with events, educational series, or you are just taking the month to heal or grow, make sure to check out at least the Toke n' Drag!   Find out more info below or visit any of the amazing humans that are a part of this event's social media!

Please come out and support!  Proceeds will be going to benefit the LGBTQ + youth that has been displaced in the community!  I have attached a "Donate Here" link to go directly to the fundraiser at hand.

"We are building a program that honors the tradition of Drag as we spread knowledge about the historical and contemporary efforts within both Drag and LGBTQ culture.  In this effort, we have the guidance of local community leaders to help us understand this rich history and lead us to our stage to elevate BIPOC (Black, Indigenous, People of Color) voices and the massive contributions of leaders in these communities moving fast, with a show date of June 19th, 2021.  The following information will help you decide best how you can get involved and help us generate a massive donation to gift just in time for Pride weekend!"
This is a benefit show that provides a wonderful opportunity to benefit the displaced youth through organizations such as SISU and the Oklahoma City Pride Alliance.
"Proudly collaborating with Urban Pride Events to bring a thoughtfully curated show featuring fabulous Drag Queens and King to help guide us through the process of getting into character and styling us to shine on stage.  Beyond aesthetic, Performers are eager to learn and share the true history of the Drag and LGBTQ communities.   As part of our on-stage performance, we will be executing a true history lesson to the audience about the significance of Drag culture and LGBTQ+ advocacy.  With the help of Urban Pride Events, we are excited to shine a very bright light on the impact of individuals from the BIPOC communities.  The weekend of June 19th is a significant and busy weekend in Oklahoma and on the national stage as well as in the LGBTQ+ and Drag communities.  The Toke n' Drag Benefit Show respects Juneteenth as a monumental occasion."
"We honor the hard work of organizers and activists across the state to bring together extraordinary Pride events throughout the month of June and even on June 19th.  The Toke n' Drag Benefit Show aims to project visibility for Drag culture and LGBTQ+ lifestyle to audiences who might not attend such events.  Performers are working a Royal Court ahead of the show to be in best form and producers are organizing a live pre-show for maximum visibility to these important relationships."
If you aren't able to make it out to the event but are able to connect online, please join us via the Facebook Page or by one of the other amazing companies covering this event.  We will be connecting via Zoom to obtain live coverage of the event from multiple angles and prospectives.  We will still be accepting live donations during the event, keep a lookout for the Live to pop up from Canna-Love LLC or you can click the link below to go ahead and donate now before the show!

DO YOU SEE THE WORLD

IN A DIFFERENT PERSPECTIVE?

Meet the one and only

When I was a child, I always felt that tie between being a "tom-girl" and as some of my family would say a "spoiled brat".  When I use the term "spoiled brat" I don't mean the type that has everything she ever wanted just handed to her, but more along the line of being treated like an only child but at the same time having siblings that were old enough to be my own parents so they already learned what is worth their stress.  The adventures we would go on and the things we would do as a family, I am extremely grateful to have been raised the way I was for multiple reasons.

In my early years discovering who I was it always entailed with me being fascinated about the opposite counter part.  But at the same time there was always a question about the woman body itself.  From time to time I would love to impersonate a male for fun, it made me happy discovering that I could transform into that counter part that I was fascinated about.  Would I want to go through the full transformation?  Honestly, no unless my partner did too but even then my heart goes out to those who make it fully!  It's no easy battle, but you have to do what makes you happy fully!

Looking back I still remember the first time I was at Disney during "Gay Day" as a child, my mom was trying to explain about how it doesn't matter who you love to me since it was the first time I had ever seen same sex couples in an impactful and positive way.  From that point on, specially living in a small town, I never questioned it; just seeing someone love someone because it makes both of them happy was enough.

Over the years I have discovered who I am as a person; a woman who loves men sexually but loves all bodies and spirits attached. Just because I've decided this is who I am doesn't mean that I don't respect others and their choices.  I have family, friends, & clients that are part of the LGBTQ+ community.  I support them in whichever way possible!  It breaks my heart how there are youth being disowned from their families to this day in 2021.

For those who know me, know that when an opportunity presents itself, I make the most out of it!  This has honestly always beens something I would love to do specially while helping raise money for those in need.

Michael Wayne Timmons the Canna-King is officially here!  On the 19th of June he will be performing to "Hey Look Ma, I Made It" to help raise money for the displaced LGBTQ+ youth in our local community via the Toke n' Drag Benefit Show along with some other amazing, talented, performers in the community.

He got his name 30 years ago but life had other plans when a little girl with the initials of KAT was born instead.  Little did everyone know that Michael Wayne was still there just waiting for the right moment to come out and sing his heart away!

Watch out Snoop! This Canna-King can roll and smoke you out, same with his counterpart.

Even though I have not been personally affected by my choice of how I identify myself or who I choose to love, it doesn't mean I haven't been affected knowing that the world is not fully educated.  I am here to help your voice reach the ends of the universe, it's been time to stop the hate and just educate.

Drag or "Male" & "Female" Impersonators have been entertaining the world since the 1800's at least.

Humans have been making love to who they want to since the beginning of times.  Only so much of that time has been spent making others feel as though it's been "wrong" when it's only human nature.